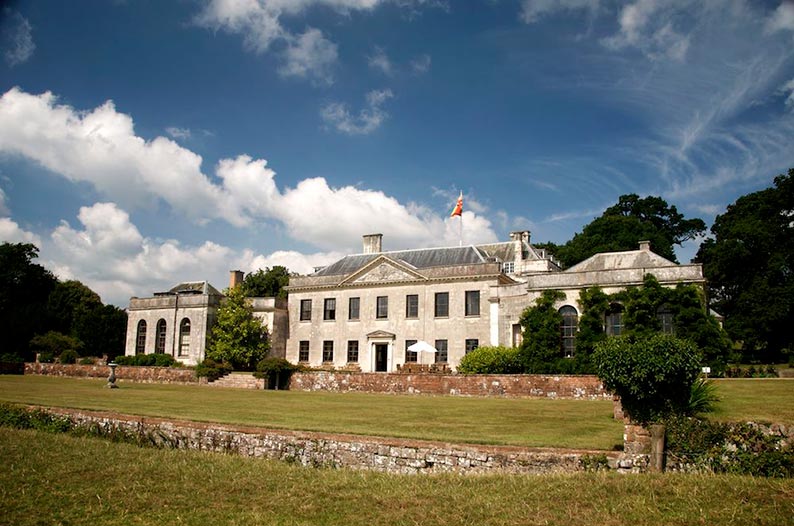 History of the House –

Moses Gould’s original building at Downes in 1692 was in red brick, but in 1794 James Buller faced the red brick with Beer stone and the windows were lowered.

The pediment with the Buller Coat of Arms was also added. In 1840 James Wentworth Buller demolished the back part of the house, which included a brewhouse and built the present red brick back section to contain staff quarters and extra bedrooms for his family of 10 surviving children. Some time prior to 1840 the West Wing had false windows and was the wine cellar with its only entrance direct from the back of the wing in the courtyard.

In about 1868 the East Wing was extended backwards. Above the present dealings are two more ceilings, the highest being the cruck roof which shows that originally the two wings were the same size.

Prior to about 1860, the east aspect of the house was outwardly Georgian in appearance but James Howard Buller altered it to conform with Victorian taste. In 1910 Tremayne Buller modernised the house. He extended the present front door entrance and made a billiard room on the right, which is now the Museum. He also knocked down the wall to the right of the grand staircase and made the original front hall and library into what is now called the Long Hall.

The library, with books collected by James Buller, was moved into the attic of the West Wing, which was altered to provide library accommodation. Sadly, the contents of the library have since been sold.

In the spring of 1980 part of the back of the house was demolished, which had been the 1840 upper and lower laundry, the dairy, the cook’s sitting room, the scullery, larder, game larder and kitchen. These rooms had fallen in to a state of disrepair, were not considered to be of any architectural merit and were totally uneconomic to maintain.

Built in 1692 the property is Grade II* Listed and sits in rolling parkland. Originally constructed of red brick by Moses Gould, the property was faced with Beer Stone by James Buller in 1794 before undergoing extensive changes during the 19th Century.

Downes is the historic home of General Sir Redvers Buller VC and includes a small museum to celebrate this.